The Cities of Unley, West Torrens and Adelaide have received federal government grant funds, through the EPAs’ Catchments to Coast Project, to design and construct streetscape scale bio-retention systems as demonstration sites for other SA Councils and the development industry.

The City of Unley will complete 10 bioretention systems in Randolph Avenue, Parkside as part of a whole of street upgrade; the City of West Torrens is constructing eight systems in Rankine Street, Mile End and 12 in Stage 1 Booker Terrace, Mile End. The City of Adelaide is currently finalising its plans for Russell Street, Adelaide. 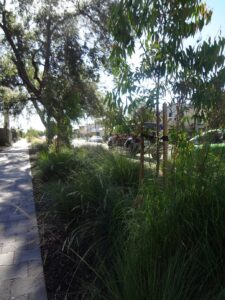 Rain Garden 500 is another component of the Catchment to Coast Project funded by the Australian Government National Landcare Programme. Local governments, community groups, schools or a group of motivated individuals will be able to apply for funding to build a bioretention raingarden in the Adelaide region. The project will run for three years, with the first call for projects to be made via the EPA website in April 2015.